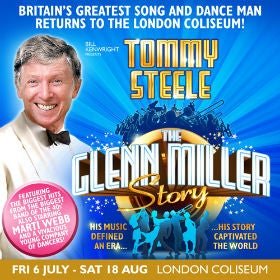 In the Mood. Chattanooga Choo Choo.  Moonlight Serenade, Pennsylvania 6-5000 and Tuxedo Junction. They're just the tip of the musical iceberg thanks to a glittering show celebrating all that's great about the late, great Glenn Miller, trombonist and band leader extraordinaire.  If you adore the sound of swing, rich in WW2 nostalgia, you'll love it. If you love the classic big band sound, you'll be thrilled. And better still, our very own original rock 'n' rollster Tommy Steele stars. It's all set to be a monster sell-out, and the London Coliseum is your venue.

If Glenn Miller hadn't been mysteriously killed in a plane crash, who knows what heights he and his band would have scaled. They scored more number one hits in four years than Elvis or the Beatles, and in many ways they helped to make wartime Britain bearable, spreading joy wherever they played. Now the talented team behind The Glenn Miller Show are bringing the great man's work back into the public eye. The show is produced by Bill Kenwright, who  also directs in partnership with Bob Tomson. The choreography is by Bill Deamer and the design by Mark Bailey.  If you want to swing the night away to magical Miller tunes, grab tickets while you can. We expect a sell-out.