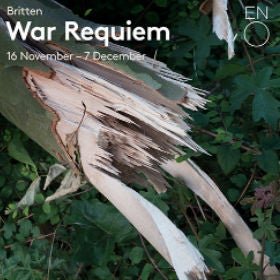 Benjamin Britten wrote his stunning choral masterwork War Requiem from 1961 to '62. It has been performed numerous times since then. But this production is particularly special, marking as it does the centenary of the end of one of the most brutal conflicts that mankind's leaders and politicians have ever involved their people in. Way back in 1914, in Sarajevo, on June 28th, Archduke Franz Ferdinand, heir to the Austro-Hungarian Empire, was assassinated by the Bosnian Serb nationalist Gavrilo Princip. The political row that ensured ended up killing 18 million people and injuring 23 million, destroying nations, communities and families.

The production involves a vast cast including a huge chorus of more than 80 singers, a children’s choir of 40 from Finchley, the full ENO Orchestra, a chamber orchestra and three stunning soloists: Emma Bell, Soprano, plus David Butt Philip, Tenor, and Roderick Williams, Baritone. ENO Music Director Martyn Brabbins is the conductor. ENO's Artistic Director Daniel Kramer has created the most amazing staging. And, as happens whenever War Requiem is performed, Britten's outrage shines through like a beacon, an outrage we can all share as human beings. Thank goodness the piece ultimately offers a welcome spark of hope for a brighter future. Add Turner Prize winning artist and designer Wolfgang Tillmans to the mix, with his brilliant designs. What a classical treat.