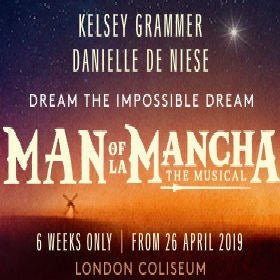 The funny story of the crazy but incredibly kind elderly nobleman Don Quixote is back in the West End after a forty year gap, on at the Coliseum, presented by English National Opera, and due to set the stage on fire during 2019. Quixote, along with his squire Sancho Panza, fight windmills because they think they're dragons. And they save the prostitute Dulcinea, who they think is a member of the aristocracy. The musical is inspired by Miguel de Cervantes’ original seventeenth-century novel Don Quixote, set during the Spanish Inquisition. The award winning US actor Kelsey Grammer leads the production as Don Quixote and also plays Miguel de Cervantes. The Australian opera singer Danielle De Niese plays Dulcinea. The musical is written by Dale Wasserman, with music by Mitch Leigh and lyrics by Joe Darion.

Inspired by the 1600s novel Don Quixote, Dale Wasserman, Joe Darion and Mitch Leigh’s classic Broadway musical is one of the most enduring pieces of musical theatre... ever. It has had a total of four New York revivals. Portrayed as a play inside a play, Man of La Mancha sees the Spanish writer Miguel de Cervantes performing a play based on his novel Don Quixote to a group of prisoners. All of them are waiting for trial, and when the thieves and whores surrounding Cervantes try to steal his unfinished manuscript, the only thing he can think of to distract them is to perform the story for their entertainment. Expect a flurry of dazzling show tunes including The Impossible Dream, Man of La Mancha itself, and A Little Gossip.